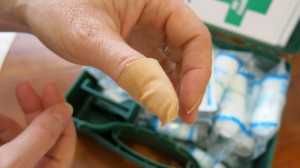 First aid not only is a complicated subject in and of itself but it has a very complicated history. Although we have little information about prehistoric man, they must have been confronted by many situations requiring first aid. For example, they must have developed ways to stop bleeding, to stabilize broken bones or to determine whether a particular plant was poisonous or not.

Over time, certain individuals become more skillful and knowledgeable about how to deal with medical situations. These might have been the first shamans and witchdoctors. Perhaps this was also the beginning of the distinction between medical care which could be provided by the “amateur” or layperson versus the “professional.” The distinction continued to develop as medical education and training became more formalized. In time, priests became physicians and barbers became the surgeons.

Another aspect of the history of first aid involved warfare. Men injured in battles and the lack of medical attention usually resulted in loss of life. In 1099, religious knights trained in medical care organized the Order of St. John to specifically treat battlefield injuries. In other words, although these knights were considered laypersons, they were formally trained to provide “first aid.”

But it was not until the mid-19th century that the First International Geneva Convention was held and the Red Cross was created to provide “aid to sick and wounded soldiers in the field.” Soldiers were trained to treat their fellow soldiers before the medics arrived.

A decade later, an army surgeon proposed the idea of training civilians in what he termed, “pre-medical treatment.” The term “first aid” first appeared in 1878 as a combination of “first treatment” and “National Aid.” In Britain, civilian ambulance crews were trained specifically for the railways, mines, and the police.

The practical skills of first aid have continued to evolve and there has been somewhat of a separation between first aid and emergency medicine. Today, ambulances in this country are staffed by personnel who not only are familiar with first aid but who also have more advanced training as paramedics and EMTs (emergency medical technicians).

We cannot repeat often enough that first aid is a complicated subject and that appropriate first aid is always situation-specific.

The better informed and trained we all are, the better prepared we should be to deal with an unexpected illness or injury.

And we would again reiterate that if you find yourself involved in a medical situation that may be beyond your personal abilities, you should not hesitate to summon emergency medical assistance immediately.

For more information regarding our first aid courses, please use the menu items at the top of this page.